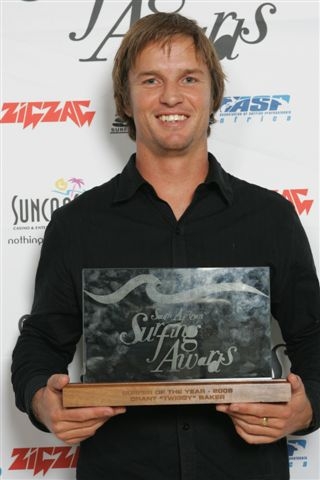 Local legend and big wave rider Grant “Twiggy” Baker walked away with the evening’s most prestigious award, Surfer of the Year, which looks to recognise the surfer who exceeded all surfing expectations in the twelve months gone by.

Baker scooped top honours for his undeniable rise to the forefront of big wave surfing across the globe after winning the 2008 Red Bull Big Wave Africa and a Billabong XXL Award for the largest wave ridden in the last 12 months.

” 2008 was a phenomenal year. I was lucky enough to be in the right place at the right time, but this evening and this award all starts here, with being a South African surfer. We owe everything we have to the SA surf legends who are here tonight, and i want to pay tribute to them. But most of all, this award goes to all the surfers in South Africa. Thank you, it’s an honour.” said winner Twiggy.

Other awards of the evening included :

Will Bendix, editor of Zigzag, comments; “We’re honoured and extremely stoked to be able to host an evening like this that pays homage to the rich culture and legacy of South African surfing. And as you can see, there’s a lot to celebrate. It’s just an awesome reminder of how lucky we are to be surfers in this country.”

Highlights of the evening included the induction of surfing legends into the Hall of Fame, which honoured an elite group of surfers who have paved the way for South African Surfing. Current members include Max Wetteland, Mike Larmont, Spider Murphy, Graham Hynes and Shaun Tomson amongst others. The new inductees announced on the evening were Errol Hickman, and Michael Ginsburg.

1989 World Champion and surfing legend Martin “Pottz” Potter  was guest speaker. When the awards ended, 1st Project went on to being the roof down with their phenomenal drumming act to round off an epic evening.

Be sure to get your June/July edition of Zigzag to check out all the latest surfing news and highlights of the awards.